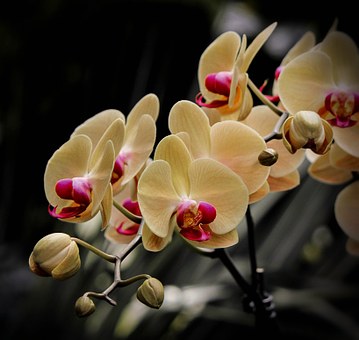 At one point, growing phalaenopsis orchids was seen as a hobby for the elite as it was considered to be quite costly.

However, growing these flowers is now possible for regular farmers mainly due to the technological advancements in the field of tissue culture cloning which have reduced this cost significantly.

Phalaenopsis Orchids, What Are They Exactly?

In their natural tropical environment, phalaenopsis orchids, popularly known as moth orchids, are said to grow off the branches of trees. Off their domed stems, the plant which has characteristically broad leaves is known to give rise to flat and showy blooms that last for an extended period. The blooms last for 2 to 3 months, something worth including in the definition of phalaenopsis orchids. The species is considered to be the easiest one to grow of all other orchid species.

The leaf width is used to determine the size of moth orchids. The number of blooms you can expect from a given plant increases with this width. Blooming takes place at different times of the year, in many cultivars and hybrids.

Planting your new plant in the correct medium is the first steps towards mastering the art of growing these orchids. The roots will suffocate and die if you attempt to grow the flower in standard potting soil. You should use a mixture that has a coarse texture, a commercial mixture meant for epiphytic orchids for instance, instead. Alternatively, for growing moth orchids, you can use coarse peat moss, hardwood charcoal, coarse fir bark and perlite to make your very own mix that does not include soil.

Without allowing the growing media to dry out completely, you should leave it to dry a bit, but still wet, in between watering periods. You can use 3 ice cubes to water your moth orchids to avoid over watering them, according to some recommendations. The drainage and nutrient retention capabilities of the growing media decreases with time; as such, after every 2 to 3 years you should re-pot your plants.

For growing phalaenopsis orchids to develop at an optimum rate, high humidity is necessary. Fifty to 80 percent humidity is sufficient for this. You can mist the plant, place a pebble tray filled with water at the bottom of the plant or use a humidifier to achieve this.

When new growth is developing, apply fertilizer to the plant. You can use a houseplant food with the label specifying a balanced 20:20:20 ratio, as an alternative to the primary option of using a fertilizer that is specifically designed for orchids.